Marriage is a miracle.What else can you call it when two imperfect people, coming from two different planets (Men are from Mars, Women are from Venus, remember?), having different preferences, points of view, body parts (ahem), past times, favorites like pizza, pasta, pillow size and softness (okay, enough), come together and become perfect for each other? What else?

It's a miracle when...
instead of getting on each other's nerves, husband and wife accept each other's differences, appreciate it, luxuriate in it, and learn from each other, grow and get all the more crazy for each other.

It's a miracle when, instead of the wife sulking and pouting, acting like a spoiled princess; she is able to behave and talk normally, with her husband's encouragement for her to talk and act with dignity and grace as befitting a queen.

It's a miracle when, instead of going out with his friends every time he is free from work, the husband comes home, loads the laundry, hangs them up when they're done, cleans the house, putters around, plays with the kids and talks to his wife.

It's a miracle when, instead of demanding for their rights, husband and wife make it their right to be kind, making sure that only kind words go out from their lips.

It's a miracle when, two very immature adults, instead of sleeping on their grievances and growing a grudge against each other, learn how to say sorry, forgive freely and sincerely, make up, and grow in maturity.

It's a miracle when instead of competing or being indifferent, husband and wife respect and support each other's dreams, helping each other reach their full potential as God has created them, making a better place of home and society.

It's a miracle when, instead of complaining of his wife's attempts to cook and her need of loving gestures and attention; husband steps up, cooks a meal for the family and cheerfully thanks wife for a very delicious meal. (Haha...)

It's a miracle when, instead of talking bad about her husband to friends and family, and laughing at him in front of everybody, pulling him down a notch every time she does; wife compliments and builds him up that he earns everyone's respect.

It's a miracle when, two people, who could have easily given up and walk away every time they fight and life gets tough, choose to stay, work and fight through the challenges together inside them and around, and come out closer, braver and better.

It's a miracle when, instead of diminishing love, time and distance just make the husband and wife's hearts grow fonder, by never taking each other for granted and living in each other's presence, thus, making their love grow sweeter and stronger.

It's a miracle that husband and wife have each other to love and to hold, helping each other up, giving strength drawn from the Mighty One, and sharing faith and laughter all life long.

Marriage is a miracle. I have witnessed it first hand in my marriage and I am filled with awe. It could easily have turned the other way that instead of marriage being a miracle, it could just have been a mirage. But God is alive and is involved in marriage now as He was then. Our marriage is important to Him. It was one of two institutions that He founded right from the start--- that and the Sabbath. And why would the first miracle that Jesus ever performed when He was here on earth was in a wedding? He turned water into wine then (see Luke 2). It reveals how He wants to be involved, how He wants to be part of our marriage if we let Him.

Jesus is still able to perform a miracle today as He did more than 2,000 years ago. He can turn something ordinary or stale, like our marriage relationships, into something extraordinary and beautiful. He just needs us to follow all that He says (John 2:5). He wants us to fill our jars with water and the rest is up to Him. For those who are contemplating marriage, invite God into your beginning. He will turn you, your mate and everything that you can bring into the marriage into a miracle right from the start. For those married, He is ready to add some sparkle into our 'watery' marriage, blessing every jar filled with the water of our good intentions and our desire to love. And before we know it, our imperfect selves are living something as good as found in 1 Corinthians 16:


"Love is patient; love is kind.
Love isn’t envious, doesn’t boast.
There’s no arrogance in love; it’s never rude, crude, or indecent—it’s not self-absorbed.
Love isn’t easily upset.
Love doesn’t tally wrongs or celebrate injustice; but truth—yes, truth—is love’s delight!
Love puts up with anything and everything that comes along;
it trusts, hopes, and endures no matter what.
Love will never become obsolete."

Ah, praise the Lord for miracles!

I humbly thank Him for mine.

(Last August 7th was my 8th wedding anniversary with my husband. It was funny though that we both forgot about it.  When we remembered, we found out that anniversaries really didn't matter that much. What matters is we have grown together, in faith, in hope and in love.)

You may also want to read...

Popular posts from this blog

Who Is Like God? (Happy birthday, my Little Captain!) 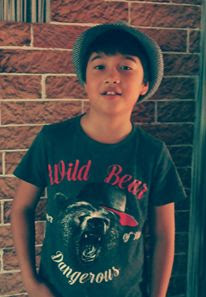 I write to you, my son, because there are some things I just don't want to say but I also want you to remember.

I became a mother when I was gifted with you. That was ten years ago. I was uninitiated in motherhood and in life. But God in His wisdom gave me you. And in having you, I longed, bordering on desperation, to "know" Him, really know Him. I didn't know then that He would take me on a long journey. One that was unforgettable and replete with deep knowing of Him.

My son, in your vulnerability and helplessness, I found God's strength as I fiercely tried to protect and care for you. In Him, I see One who Protects those who are weak, vulnerable and are dependent on Him.

7 Tips for a Joy-filled Parenting 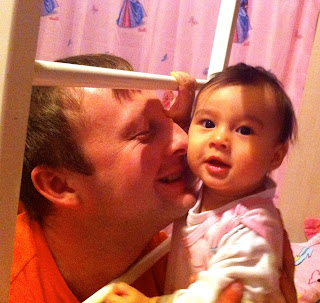 Startled, I woke up from a deep sleep. I groaned. I still wanted to sleep, so I ignored the cheery voice, which was too cheery for a Saturday morning. Why can't I get an extra hour of sleep today like everyone does before my day starts and ends again at 12:00 midnight?

The childish voice came again, "Good morning, Mom! Wake up!" So I replied, "Mama is still sleepy. Please lie down again," trying to sound as sleepy as I could.

"Mama, wake up," the 'little dawn' shines, more insistently this time. So I rolled out of bed, head pounding and scooped my little toddler out of her crib (still didn't get to moving her to a toddler bed, no budget yet) and towards her potty. She held her arms wide open, ready to hug me tight, with a huge, bright smile on her face. I couldn't help but smile back and whisper, "Good morning, Roxy," as her little arms embraced the whole of my heart. 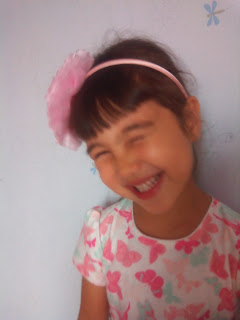 And so it is that as the rain drops outside, I blog again after the longest time of not doing so. And it is because it is my little Ella's sixth birthday. She's not so little any more, yet still the sweet little one I love. But much sweeter and lovelier. So in connection to a writing project for my kids, here's one for her.

Happy birthday my little raindrops (or is it starlight?) Whatever you want me to call you, you can always call me Mom.
I love the sound of rain on the roof, on my umbrella--- just as I love the tinkle of your laughter. Your eyes light up, your smile all turned up heralding mirth, showcasing your merry heart.
I love the smell of rain as it waters the earth and how it leaves everything crisp and clear. So are you, my dear, the moment you enter a room, your presence is so refreshing. Must be the innocence or that impish glint that is so endearing.
Rain falls softly, but it can be tough, too. And you have that soft heart that easily melts, but, my,! I do kn…
Read more

Beyond the Storm: Hope 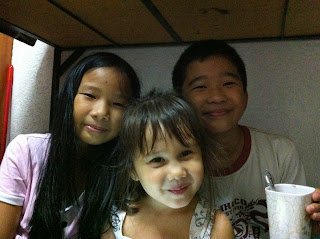 (A simple account of how three kids survived typhoon Haiyan.)

A monster storm was coming! Okay.

For most people in the Philippines, we get to experience storms not just once, but even more than there are fingers on our hands and toes on our feet. But everyone was warned that this one was going to be a terrible one. So everyone prepared.

Beyond the Storm: Faith

November 22, 2013
Faith is the reality of what we hope for,  the proof of what we don't see. Hebrews 11:1
I am a mother of a Haiyan typhoon survivor. Actually, I am a mother, an aunt, a sister and a daughter of real people victimized by this Monster Storm. I didn't expect to be one.
Nor do I hope or ever want to be. Or even wish it on anyone.

Thanks for dropping by at my blog. I try to capture life in it's many colors and taste in words or pictures as I receive it with open hands. I hope you will find some ray of sunshine in this place, the sparkles through the rain, faith to get through storms and struggles, joy even in the puddles, hope for the better and grace to grow sweeter. Yes, there is beauty in imperfection. The Perfect One--- "He makes all things beautiful in His time" (Eccl. 3:11).